National Priorities List: Why Fort Ord is a Superfund Site.

On February 21, 1990, Fort Ord was added to the National Priorities List because of groundwater contamination. A Federal Facility Agreement, as required under Section 120 of the Comprehensive Environmental Response, Compensation, and Liability Act, was signed by the Army with the U.S. Environmental Protection Agency, California Environmental Protection Agency’s Department of Toxic Substances Control, and the California Regional Water Quality Control Board and became effective on November 19, 1990.

Based on successful munitions and soil cleanup efforts, on May 14, 2021, the EPA published a Federal Register notice announcing the deletion of 11,934 acres of the 27,827 acre Fort Ord Superfund site (see map below) from the National Priorities List (NPL), also known as the “Superfund list.” This partial deletion: 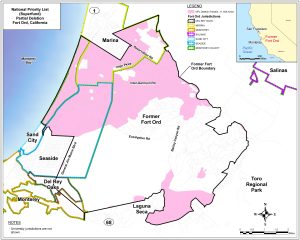 In consultation with the California Environmental Protection Agency’s Department of Toxic Substances Control and the California Regional Water Quality Control Board, the U.S. Environmental Protection Agency determined these portions met the criteria for site deletion, and that all appropriate response actions have been implemented.  EPA policy allows for these cleaned up soil areas to be deleted separately from contaminated water and soil gas below the ground. The Army will continue to clean up the groundwater and soil gas on the 11,934 acres included in this deletion, as well as the remaining 15,893 acres of the site, as these areas are still in the Superfund program and on the NPL. Selected remedies for several sites include land use controls designed to minimize the risks of exposure to prior or current contamination, such as land use restrictions and groundwater well prohibition zones. All land use controls will continue to be implemented and monitored even after the partial deletion. Five-Year Reviews are required when contaminants remain above levels that allow for unrestricted use and unlimited exposure, even if a site has been deleted from the NPL.

Fort Ord Federal Facility Agreement: The Army is responsible for the cleanup.

Under the Federal Facility Agreement, the Army was designated as the lead agency and the U.S. Environmental Protection Agency, Department of Toxic Substances Control, and California Regional Water Quality Control Board were designated as the regulatory agencies for the Superfund process at Fort Ord. The U.S. Environmental Protection Agency is the lead regulatory agency.  Fort Ord was approved for closure by Congress as part of the 1991 Department of Defense Base Realignment and Closure Commission’s recommendations and was officially closed in September 1994.

Fort Ord’s environmental cleanup program is complex and wide-ranging. The major issues are groundwater contamination, a landfill, soil contamination, and military munitions and the associated prescribed burns conducted to prepare areas for munitions cleanup. Since 1990, the Army has completed many investigations and cleanup actions and transferred much of the property to the identified reusers. Redevelopment projects have been constructed or are underway in several locations across the former Fort Ord. The parties to the Federal Facility Agreement have completed Decision Documents addressing groundwater contamination, the landfill, soil contamination, and military munitions as well as identifying many areas for no further action. The Army’s current fieldwork includes munitions cleanup, as well as operating groundwater treatment systems and maintaining the landfill cover system.

Considerable progress has been made toward completing the cleanup; however, additional work remains to be done. One groundwater treatment areas has been cleaned and the regulatory agencies had noted no further action is required — at Operable Unit 1. The remaining three groundwater treatment systems are in the operation and maintenance stage.  The landfill is in a maintenance stage.  Munitions cleanup of historic Impact Area is expected to be complete in the next 8-10 years. Some soil cleanup related to historic range areas remains to be cleaned and additional soil cleanup may be indicated after munitions cleanup is complete and areas are safe for identification of any potential soil cleanup. The Environmental Services Cooperative Agreement Remediation Program has  received regulatory closeout approval.

With the closure of Fort Ord, responsibility for the remaining Army activities were transferred to the Office of Assistant Chief of Staff for Installation Management (ACSIM), Base Realignment and Closure (BRAC) Division, The cleanup of the former Fort Ord is managed under contracts through the U.S. Army Corps of Engineers. 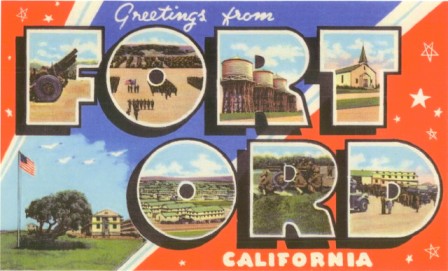